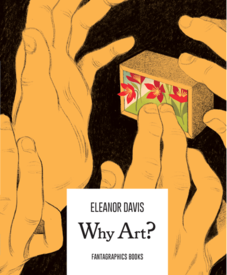 In her Fantagraphics follow-up to How to Be Happy, Davis opts for a similarly archly refractive title.  Why Art? (Fourth Edition) does not present an expository answer to the question its title poses, but it does, like its forerunner, embody a through-composed approach to its subject that could be construed to do so.  It is a highly personal and idiosyncratic approach, savvy yet bittersweet, and one that takes a surprising – and intriguing – twist that longtime comics readers will recognize as a thematic recapitulation of the late-'50s/early-'60s work of Steve Ditko(!).

The book's signal achievement is to present an examination of Art from the perspective of Comics.  After a century in which the world of Art colonized, appropriated, co-opted and exploited the natural resources of the world of Comics in a manner that has its roots in "the divine right of kings", Why Art?  turns the tables and, taking a distinctly New World (aka American) stance, incorporates Art as a key linguistic unit within an egalitarian and democratic language system constituted by Comics*.  Starting with her suggestive decision to employ an inverse of the color scheme of the Greek Urns of classical antiquity – which can be considered as ur comics due to their depictions of sequentnial/narrative actions, thus bringing the question of the relationship of Comics and Art to the dawn of Western tradition – and continuing through the work's narrative of comics as art imitating life imitating art imitating life, ad infinitum.

* (While, in must be said, nevertheless also maintaining an apocalyptic teleology largely derived from Judeo-Christian tradition [see Steve Ditko].)