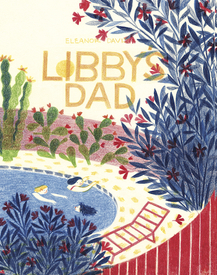 Never one to rest on her laurels, Ms. Davis has once again headed out into new territory, thematic as well as technical.  Superficially the tale of an all-girl suburban sleepover pool party at the home of the divorced father of one of the girls – the titular character – Libby's Dad is a multilayered and multileveled tale of the porous border between innocence and ignorance.  Set firmly in the present, Davis pithily portrays contemporary mores and cogently addresses contemporary concerns in her presentation of both story and setting, yet manages to evoke timeless narratives that echo – albeit indirectly – biblical themes, specifically that of the Garden of Eden and the fear of an angry and wrathful God.  Davis accomplished these evocations in large part through the visuals, in her choices of what is depicted as well as the manner, materials and mode through which she she realized these depictions.  Her primary choice was to execute Libby's Dad entirely in colored pencil, with no black line.  Complementing this was her decision to dispense with panel borders, which makes for organic amorphous panel-to-panel transitions within and between each page.  These traditional linguistic signs of the ink line and the panel border both serve limiting and controlling functions which are traditionally related to patriarchal values.  Davis’s decision to eliminate them paradoxically calls more attention to the theme of patriarchy, which is woven through the tale, by virtue of their absence, and simultaneously serves as a subtle and suggestive counterpoint, an allusion to the values that are excluded from the patriarchy, which is also directly referenced in an image of Libby’s mom.  Additionally, as the cover image amply illustrates, images of vegetation are a significant aspect of the diegesis and serve to create a pronounced garden motif which can – and should – be read here as a sign for the Garden of Eden.  It is an Eden that the girls in the story are, evidently, in no hurry to depart from.

This item belongs to the categories: Copacetic Select, Small Press Comics
This item is part of the series: Retrofit Comics
You may also enjoy these related titles: