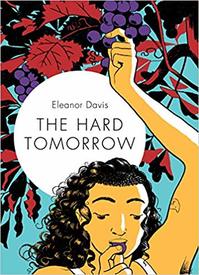 Before cracking open The Hard Tomorrow, it might be a good idea to mentally buckle up – and maybe even put on an emotionally protective helmet for good measure – as Eleanor Davis's new graphic novel lives up to its title.  It is indeed a hard hitting look at how the here and now could play out in what's coming – but certainly not one without hope, and that is, ultimately, the point.  Beautifully drawn, dramatically paced, and overflowing with empathy for its fully realized cast of characters, The Hard Tomorrow is vibrantly alive to being in the world in America in our time.  Davis's choice to set the work a few years in the future (apparently 2022) gives her leeway to ramp up the intensity by projecting current trends forward.

Here in these gritty black and white pages we encounter hard working people trying to live decent, moral lives, outside of the exploitative, callous and uncaring system that constitutes the mainstream of American life and culture, many of whom are also fighting to change this system – political activism is central to the narrative – and some who are simply trying to hide from it.  You'll have to read it to discover how it all plays out; you won't find out here!

The title has a very distinct noir/hardboiled fiction ring to it – think The Big Sleep, The Long Goodbye, The Hard Goodbye, et al, but, perhaps, most of all, The Long Tomorrow, which was a hard hitting post-apocalypse, science fiction novel written by the versatile Leigh Brackett who, while highly respected for her science fiction and fantasy novels, is perhaps most well known for her screenplays for the films of... The Big Sleep and The Long Goodbye.

In some respects, Eleanor Davis is in Frank Miller / David Lapham territory here.  But, Davis is in an entirely different place from Miller and Lapham in her understanding of and empathy for the physical and emotional lives of her characters; and, in locating their difficulties in structural inequality and America's political realities, her understanding is quite a bit more sophisticated and nuanced.  Davis takes the noir sensibility and reconfigures it in the light of parenthood (with a strong emphasis on motherhood) – prospective and actual – and in the process shows how hope grows out of the soil of vulnerability.  And the traditional sublimiated male homoerotica that suffuses many he-man adventure stories is here replaced with an articulated female homoerotica.  Additionally, the employment of the standard science fiction trope of forward projection of the present into the future enables Davis to mitigate the fatalism that normally permeates hardboiled noir, as the reality presented is thus necessarily speculative.

Suffice it to say there are quite a few pleasures of the text to be had here – some of which will appeal to a different audience than her prior work.  While we are confident that nearly all current fans of Davis's work will fully appreciate what she is doing here, this is also a work that is likely to appeal comics readers who have never encountered her comics before.  We are excited by the prospect of readers drawn in by her comics chops and noir sensibility encountering her insightful worldview.