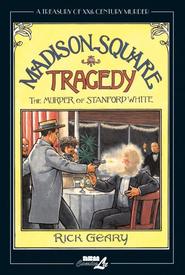 The latest in Geary's long-running series of infamous murders has a Pittsburgh connection.  The subject of this particular murder, Stanford White, was, at the turn of the last centurty, one of New York City's most famous architects.  He was more than a bit of a playboy, and his most famous playmate was Evelyn Nesbit, who went on to become the most important model for the illustrator Charles Dana Gibson, becoming in the process, basically, the mold from which "the Gibson Girl" – which became synonomous with the glamor of the era – was made.  Nesbit went on to marry a Pittsburgh heir with a dark side, who became obsessed with Nesbit's earlier relationship with White, and the rest is history – of the scandalous, era-specific sort that it is Geary's specialty in recreating.