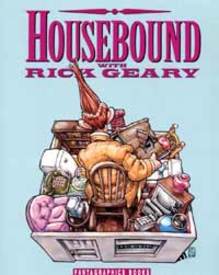 Though he is better known now as the creator of a series of Victorian murder mysteries, back in the day Rick Geary was (more or less) the Richard Brautigan of comics.  He pioneered the genre of short, off-kilter stories that, by virtue of their peculiar slant on the events they portray, continue to provide readers with fresh perspectives on the mundane.  The stories contained in Housebound are, on average, over twenty years old, but they are as unique now as they were when he first laid Rapidiograph pen to paper. Quirky, entertaining and fun, this book is a one of a kind* treasure that is now out of print... but we still have a few left! (*Well, truthfully, it is one of two of of a kind:  the companion volume, At Home with Rick Geary -- with which, it should be noted, there is some overlap in material -- is every bit as wonderful.)

In stock and on SPECIAL!

This item belongs to the categories: Copacetic Select, Collections, Special Sale
You may also enjoy these related titles: