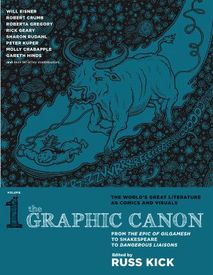 
edited by Russ Kick
This 500 page large format anthology is the first in a series that presents "the world's great literature as comics and visuals", "from the Epic of Gilgamesh to Shakespeare to Dangerous Liaisons" in black & white and full color comics and illustration.  The contributor list read's like a who's who from the past, present and future of comics, including the likes of Will Eisner, Robert Crumb, Rick Geary, Sharon Rudahl, Seymour Chwast, Hunt Emerson, Peter Kuper, Andrice Arp, Edie Fake, Matt Wiegle, Aidan Koch – whose adaptation of Shakespeare's Sonnet 20 is a revelation – and Rebecca Dart – whose twelve full page illustrations of Milton's Paradise Lost channels Charles Burchfield through Chuck Jones to create an epic synthesis that will knock your socks off.  Some of the works in this collection have been seen before:  notably, the Crumb, Chwast, Eisner and Emerson contributions are reprinted and/or excerpted from previously published works.  Most – by a large majority – are new to this volume, however, and make it well worth a look.  And this is only the first of three volumes!  Some parents reading this might be prompted to think, "Hey, this would make a swell way to get the kids interested in the classics of literature!"  Thus we must duly note that there are some graphic depictions of sexuality contained within the pages of this volume.  And while they are very modest in number, making up only a tiny minority of the pages (certainly less than 5%), they are there. The primary culprit here is Aristophanes's Lysistrata, which just about everyone read(s) in high school, and so should have some idea what to expect; it is adapted by a woman artist and is not prurient in its presentation, but is graphic.  Only Noah Pfarr's adaptation of Donne's "The Flea" makes any attempt to heat things up.  Even Crumb's take on Boswell's London Journal in quite tame by his standards, so there's little if anything to get incensed about here.  It's more or less an issue of where to draw the line agewise.  We'd recommend holding off on this to any readers under 13; it's probably too much for them in any case, regardless of sexual content.