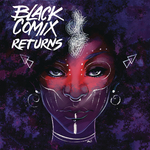 Black Comix Returns is a giant-size celebration of black comics, primarily, if not wholly, made in North America. This massive, oversized, full color, 200 page hardcover showcases an amazing variety of work ranging from epic heroic fantasy to intimate personal reflection that incorporates plenty of astute social observations and savvy political commentary along the way.  The contributors to this volume are far too numerous to list them all here, but include many artists whose work Copacetic regulars will be familiar with, such as Keith Knight, Ben Passmore, Whit Taylor and Ron Wimberly, along with plenty of new talents to discover here for the first time!

This 343 page academic anthology tackles the many ways and manners in which black identity has been constructed in comics.  The essays in this volume range far and wide.   Major black auteurs like Jackie Ormes, Kyle Baker and Aaron McGruder are each discussed in depth (although it appears that Oliver Harrington is, while given due props, not given much critical attention) as are specific works with black themes, like Daddy Cool, Stagger Lee, Bayou, Truth, Aya, as well as Jimmy Corrigan, the Smartest Kid on Earth and even a specific arc of Unknown Soldier! There is attention paid to black comic book heroes as well, those created by whites as well as blacks -- but with the primary focus being on the latter.  Luke Cage, Black Lightning, Storm, VIxen, Cyborg are here, as are indie creations Ramzee and others.  A special feature focuses on Milestone's Icon by Dwayne McDuffie  & Co.  Surprisingly, little is said about Jack Kirby's black characters, most notably, The Black Panther.  The Pittsburgh Courier gets a well-deserved shout out as a major African-AMerican media outlet and principal source of important cartoons about black life in America.  And there'splenty more!  Anyone interested should cruise over to the Rutgers University Press page devoted to this book, which includes the complete table of contents.