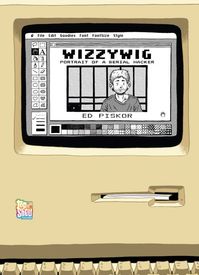 A fictionalized historical account of the rise – and, to a point at least, the fall – of the hacker ethos that is an inextricable component of our internet age, Wizzywig is Pittsburgh-based cartoonist, Ed Piskor's solo graphic novel debut.  The first three parts of this epic work were self-published by Piskor beginning in 2008, whereupon it developed a well-deserved following among the silicon valley cognoscenti.  The work as it appears here not only (finally!) completes the story, but the previously published parts have been extensively reworked.  All is combined together in this cleverly designed hardcover edition that retails for a fraction of the combined cost ot the original self-published editions.

Long before personal computers developed their current ubiquity, rebellious sorts were digging into the controls and logic employed by "Ma Bell" to manage the telecommunications systems of the time.  When the age of the personal computer first dawned, "Phone Phreaks" soon evolved into proto-hackers, before gradually flowering into full blown hackers that gave rise to a new subculture.  In the characters of Kevin "Boingthump" Phenicle, Jr. and his media liaison, Winston Smith, Ed Piskor has distilled the essence of the evolution of the hacker culture into this pair of rogues and tells their tale in a solid straightforward narrative that is by turns humorous, dramatic, hair-raising and sad.

Piskor is a practiced cartoonist who has two full-length graphic novel collaborations with the legendary Harvey Pekar under his belt (Macedonia and The Beats).  He has solid old school chops that amalgamate the language of the comic books he grew up with and possesses a sharp satiric edge.  Wizzywig is an engrossing read that provides some hard won insights into the motivations and ambitions of the downtrodden underdog and how these manifested themselves at this particular crossroads of technological change.

This item belongs to the categories: Graphic Novel, Gift Catalogue, Made in Pittsburgh
You may also enjoy these related titles: