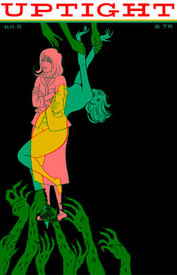 Speaking of long awaited comic books, here's another one that copacetic customers have been patiently awaiting for (quite) awhile.  Well, we're quite pleased to announce that the wait is over for what is certainly one of the finest pamphlet comic book series going.  (Although we're not sure if one issue every two years really qualifies as "going.")  This time around we have a kind-of-sort-of Dr. Jekyll and Mr. Hyde split issue in which the Dr. Jekyll component appears an unnamed, cuckolded garage mechanic who is the protagonist in the first story (although one could easily make the case that it is girlfriend, Delores, who is in fact the protagonist of this story; but that would mess up our simile) and Mr. Hyde manifests as the (re)appearance of Simon from The Clouds Above in an all new adventure which, we suspect, serves a compensatory function.  Anyway, it's safe to say that this is one comic book that no self-respecting comics reader can go without.  Especially as no one can use the excuse of being too broke to afford this one.  It's worth it just for the cover alone.

This item belongs to the categories: standard pamphlet comic book
This item is part of the series: Uptight
You may also enjoy these related titles: