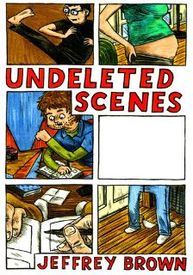 Well, anytime anyone is on the subject of big fat little books filled with fun personal comics, it's almost inevitable that the conversation turns to Jeffey Brown, who has made this form his mainstay, and has developed one of the most recognized bodies of personal comics work around.  Undeleted Scenes finds Mr. Brown back at Top Shelf Productions after a trio of books from mainstream book publisher, Simon & Schuster.  The majority of the comics collected in Undeleted Scenes have been previously published, primarily in Minisulk, Feeble Attempts and Be a Man.  There are also works that are a bit off the beaten path and so have likely been inadvertently passed over by many of Brown's fans, such as the pieces that originally apperared in Kramers Ergot #4, McSweeney's, Blood Orange, Tilt, Hobart, The Florida Review and Galago.  In addition to all these, this 350 page collection contains a decent number of strips that have never been published before.  There's something for everyone here!