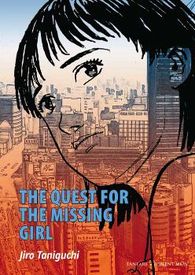 Here's an item that we've had in stock at the store for awhile now, but failed to give it the attention that it deserves.  And so now, in emulation of this fine work's protagonist, Takeshi Shiga, we are coming down from our mountain refuge to set things straight.  This work is as excellent a piece of craftmanship as you are likely to find anywhere in comics today.  Let's just come right out and say it:  Jiro Taniguchi is the man.

Divided into a meticulously planned and expertly paced thirteen chapters, this book presents a classic story arc involving an archetypal man of honor repaying a debt.  The archetype to which Shiga belongs falls into the same category as Wolverine™ and The Punisher™:  that of  the emotionally wounded male unable (or unwilling) to commit to a loving, reciprocal, sexual relationship but ready, willing and able to commit everything to a heroic task to compensate for this lack and so close the wound.  Shiga's character, abilities and environs are, however, endowed with a far, far greater degree of verisimilitude than those of any character on display in corporate-owned American comics; not to mention the fact that his actions show him to be possessed of a significantly greater moral acuity and personal virtue.

The narrative follows the well worn path – defined by Raymond Chandler sixty years ago, when he wrote, "(D)own these mean streets a man must go who is not himself mean, who is neither tarnished nor afraid" – of the virtuous civilian soldier, personally above reproach, who pushes his way through the morass of a contemporary urban environment, wherein he must make his way over, under, around and/or through a wall of lies – erected by the inevitably corrupt powers-that-be with the self-serving purpose of maintaining their unjust and clearly exploitative control of the society they share with the hero – and thereby reach the truth and bring justice.  The Quest for the Missing Girl is so close to a perfect realization of this particular form that we might want to consider it a material manifestation of its Platonic ideal in comics.  Taniguchi's attention to detail is such that  gaijin readers will receive the added bonus of being taken on what amounts to a guided tour through a cross section of Japan that will provide them with a greater understanding and appreciation of its topography, society and character.

We're not in the business of spoiling the immense reading pleasure afforded by a work such as this, so we will refrain from revealing any of the plot particulars, prefering instead to offer our assurances that you will not be disappointed.  And, while we would be the first to concur that today the term "graphic novel" primarily serves to promote the marketing of comics in bookstores, should this term ever manage to cohere into an actual literary form, we feel confident that The Quest for the Missing Girl will fit the bill.   Anyone wanting to know how it's done need look no further, this is quest's end.

This item belongs to the categories: Graphic Novel, Gift Catalogue, Copacetic Select, International
You may also enjoy these related titles: