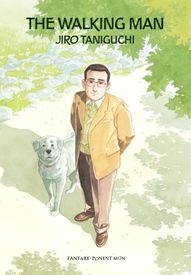 FINALLY!  The long promised hardcover reissue of – believe it or not – the best-selling manga in Copacetic history has arrived.  The Walking Man is a sui generis work of pen and ink contemplation, a book filled with page after page of microcosmical meanderings that follow the whim of the moment, ungoverned by any societal dictate, yielding neither to appetite but only to impulse, following the life force in page after page of disciplined and reserved yet discreetly joyous artwork that sympathetically stimulates the senses in a work freed from consciously directed narrative to wander where the heart roams.  Here's what we wrote when the book was first released: "his 160-page french-flapped softcover volume collects eighteen zen-like tales of the "man who walks."  Reflective, insightful meditations on the modern, suburban condition, these stories embody the soul of manga.  While the landscape through which our hero walks is indisputably Japanese, the stories told and the lessons learned on his brief treks are indisputably universal.  Taniguchi has managed a unique feat here.  The comics in The Walking Man are stripped of all extraneous elements.  There is a near total absence of narrative in the pieces collected in this volume.  With extraneous temporal distractions removed, the pure essence of comics remains and we are left face to face with a direct, graphic communication of the here and now.  These are comics that dig deep into the mind and trigger a panoply of sensations: the heat of the sun on one's back, a cool breeze along the side of one's face, the smell of flowers, the cold, creamy taste of ice-cream, the hard exertions of a fast run, the overall feel of the encroaching darkness, the sounds of children laughing, water flowing, a passing train... all these sensations and more are triggered by the series of images that the reader is presented with as the pages are turned and the walking man goes on his way.  To get a better idea, check out this preview.  Recommended.  And then, at any time before, during or after reading The Walking Man, we also recommend that you read the essay that laid the foundation for the philosophy (or, at the very least, its American branch) that suffuses this work, "Walking" by Henry David Thoreau.

Out of print -- Again! (>sob!<) BUT, no need to despair, as it has now been reprinted yet again, in a new, unflipped, expanded edition, HERE!