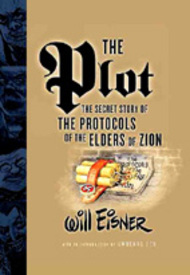 The Plot
Will Eisner
published by no publisher listed

Now available in a low priced softcover edition.  Here's our listing for the hardcover edition:  "The final work by one of comics' greatest practitioners and an early  pioneer of the graphic novel form, The Plot reveals the history of how the infamous anti-semitic Protocols came into being as well as how they were subsequently used.  It is in keeping with much of Eisner's later work in its exploration of the dark underside of human character, but this time around it is a documentary work based on facts, and it is quite a bit darker; but the story told is one worth learning about, for some of the 20th century's most misguided leaders looked to this false document's lies for justification, and, sadly, in this the supposed "information age" of the 21st century, some still do.  To learn more, read this review by Tony Norman at the Pittsburgh Post-Gazette."

P*S Magazine: The Best of The Preventive Maintenance Monthly

The Will Eisner Shop