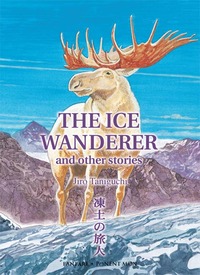 Oh, happy day!  240 pages of new (to non-Japanese readers) work by the manga master, Jiro Taniguchi, whose one-of-a-kind The Walking Man, is one of our all time favorites here at Copacetic.  Of the six stories contained in this volume, all but one deal with variations on the "man vs. nature" theme.  The first two, the titular lead off and "White Wilderness", are both derived (although, in the case of the former, it seems possible that the derivation is apocryphal) from the work of Jack London, and take place in the deep Yukon wilderness of a century ago.  "Our Mountains" is also a tale of winter, snow, mountains and predatory animals, but his one takes place in pre-WW II era Japan and involves a one-on-one with a bear.  After these three rugged and manly tales, the collection takes a surprising turn with "Kaiyose-Jima," a tale of a lonely 9 year-old boy summering in a quiet fishing village in the middle of the Showa era (late 1950s) Japan.  He is befriended by a teenage girl who was left orphaned after her parents perished at sea, but is herself fearless, in contrast to the boy's fearfulness.  "Shôkarô", is the lone story not set in the great outdoors. It is, in fact and intriguingly, the exact opposite, taking place almost entirely indoors, in the claustrophobic atmosphere of an odd apartment block that was a converted brothel.  It is the (autobiographical?) tale of a budding manga artist working on getting his start, and contrasts the artist's cramped domicile with his vivid imagjnation, his neighbors to himself, and ultimately his life and his art.  The collection closes with "Return to the Sea", which is less a tale of man vs. nature than an attempt of man to conect to nature in the form bowhead whales.  We are filled with awe at the amazing level of artistry demonstrated in this tale, including what must be the greatest pen & ink renderings of whales in the history of comics.  This tale takes back across the Bering Straight to the coast of Alaska and brings us once again into contact with an ancient legend dealing with death and rebirth, and makes for a fitting and hopeful conclusion to the collection.  You don't come across ones this good very often,  Recommended!

This item belongs to the categories: Copacetic Select, Collections, International
You may also enjoy these related titles: