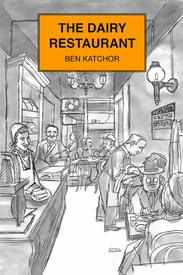 Ben Katchor's latest, and, at 496 pages, longest work to date is a history of mankind as viewed through the prism of going out and gettting something to eat – and a significant departure from his previous works, primarily in that it is not, at first glance, comics as we know them, but rather a hybrid of text and image.  Gradually, it becomes clear that this is, nonetheless, a form of comics, and this is part of the work's formal thesis.  Every spread contains one or more illustrations, rendered in Katchor's trademarked pen & ink w/inkwash.  A clean, modern sans serif text then wraps around these illustrations, which literally run seamlessly from cover to cover, making The Dairy Market, in this regard, more like a traditional comic book than most graphic novels today, which mostly adhere to the formal conventions of book publishing norms with mostly blank pages for title, acknowledgements, copyright information, etc.  This all-overness is formally emblematic of Katchor's thesis that the amount of history, information, anecdote, myth and legend surrounding the topic of food procurement is literally endless, limited only by the space allotted.

While the book begins at the (Biblical) beginning and does indeed cover much ancient and early history, with a special – but not exclusive – focus on Biblical and Talmudic sources, a large portion of the book focuses on food in relation to the Jewish cultures of Europe and America during the 19th and 20th centuries, and how that in turn is related to the larger containing cultures.

An æsthetic treat and a goldmine of information and insight from the one and only Ben Katchor!

This item belongs to the categories: Gift Catalogue, Graphic Novel, History & Biography
You may also enjoy these related titles:

Hand-Drying in America and Other Stories