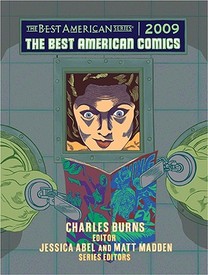 <<•>>  edited by Charles Burns; series editors Jessica Abel and Matt Madden  <<•>>   Well, Crumb is a tough act to follow, but we'll give it a shot with this star-studded anthology filled with the best and the brightest from the last twelve months of comics, as judged by Charles Burns.  In a book like this, we feel that the contributor list says it best:  Doug Allen, Peter Bagge, Gabrielle Bell, Matt Broersma, Daniel Clowes, Al Columbia, Robert Dennis Crumb, Sammy Harkham, Tim Hensley, Gilbert Hernandez, Kevin Huizenga, Ben Katchor, Kaz, Aline Kominsky-Crumb, Michael Kupperman, Jason Lutes, Tony Millionaire, Jerry Moriarty, Anders Nilsen, Gary Panter, Laura Park, Mimi Pond, Ron Regé, David Sandlin, Koren Shadmi, Dash Shaw, Art Spiegelman, Ted Stearn, Jillian Tamaki and Mariko Tamaki, Adrian Tomine, Chris Ware, Dan Zettwoch.  'Nuff said.  Well, actually, we can't help but add that while the material contained in this anthology is absolutely fabulous, the quality of its reproduction is, mysteriously, not up to the same standard as the three previous volumes in this series, which were excellent in that department.  This shouldn't stop anyone from picking up this fine volume, but it is worrisome.  Let's hope that this was a one time aberration and that next year we'll find the fine folks at Houghton Mifflin have figured out what went wrong and put things in the production department back on track.

This item belongs to the categories: Anthologies
This item is part of the series: Best American
You may also enjoy these related titles: