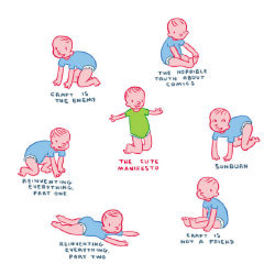 The Cute Manifesto
James Kochalka
published by no publisher listed

James lays it all on the line in this one, as he let's fly with his most deeply held beliefs:  on the state of existence, the meaning of life and its relation to death and the hows and whys of everything (along with a few more mundane topics such as the relationship between craft and art); and on how it all relates to that subject most dear to him -- comics!  Kochalka naysayers beware: in The Cute Manifesto he actually manages to successfully address some substantial issues and make some fairly interesting observations; both in comics and about comics.  Long time Kochalka readers will be familiar with some of the material here as it previously appeared in now out of print comics; and hard core Kochalka fans will have read almost all of it as most of the rest was previously released in a couple of mini-comics that Kochalka self-published and sold at shows.  But for the rest of us, this 168-page volume is all new, and -- despite its relatively hefty price tag -- well worth the while of anyone who enjoys pushing the  boundaries of comics and exploring the universe through line on paper. 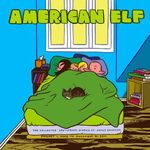