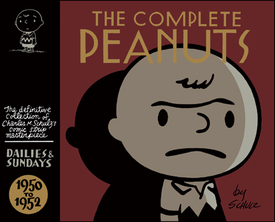 The Complete Peanuts - Volume One: 1950-1952
Charles Schulz
published by Fantagraphics

by Charles M. Schulz Introduction by Garrison Keillor Peanuts, the most popular newspaper comic strip of all time, is now being collected, in its entirety, in chronological order, by independent comics publisher, Fantagraphics.  This first volume is of extra special note as many of the strips it contains have never before been reprinted. Starting at the beginning -- Monday, October 2, 1950 -- with the first ever Peanuts strip -- the strip was daily-only (Monday through Saturday) until 1952, when a Sunday page was added on January 6 -- this volume continues all the way through to December 31, 1952, and contains the introductions of practically all the characters that were to populate the strip for the next 50 years.  There are many surprises along the way, such as seeing Lucy as well as Schroeder starting out as babies!  For readers unfamiliar with the early years of Peanuts, most surprising will be the edge of anger that lies just below the surface of many of these early strips (it may be for this reason that Schulz resisted their being reprinted in his lifetime).  It is Schulz's working through this anger to the peace of acceptance that is a key component of the lasting appeal and value of Peanuts.  And there's more:  This volume contains, in addition, a 13 page biographical essay on Schulz by David Michaelis, a 34 page interview with Charles Schulz, conducted in 1987 by Rick Marschall, and, amazingly, an index of characters, themes, cultural references -- such as, for example, comic books, golf, and dads -- historical figures mentioned in strips, and such priceless bits as "Charlie Brown: football pulled away by Lucy for the first time" (page 268) AND "Charlie Brown: football pulled away for the first time, by Violet (page 117),"  that is a true treasure trove for Peanuts fans and cultural historians alike.  All of this is nicely put together in a package designed by Seth that is a subtle yet evocative homage to the midwest milieu that inspired Schulz.  We should all be thankful that Fantagraphics was put in charge of this project and that they have lavished it with the devotion that it deserves.  This marks the beginning of what is, surely, the highest profile classic comic strip publishing project of all time. hardcover

This item belongs to the categories: Gift Catalogue, Classic Comics Collections, Newspaper Comics Strip Collections, Collections, Kid Friendly
This item is part of the series: The Complete Peanuts
You may also enjoy these related titles:

But WE Love You, Charlie Brown