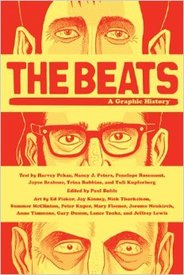 by Harvey Pekar & Ed Piskor with Paul Beuhle, Trina Robbins, Peter Kuper, Mary Fleener, Summer McClinton, et al The dynamic duo of historical comics, Harvey Pekar and Ed Piskor, are back with The Beats: A Graphic History.   Yes, of course, the unholy trinity of Kerouac, Burroughs and Ginsberg are here, front and center, but this anthological history of the beats ranges far and wide to include the likes of Michael McClure, Robert Duncan, LeRoi Jones/Amiri Baraka, Charles Olsen, Lawrence Ferlinghetti, Diane di Prima, and many others.  While the focus is on the 1950s we are taken back to the early days of the principal actors and up to the present with the reverberations of their work, actions and lives.  It's hard to overstate the impact that these figures had on American culture.  They were the prime movers in consciously breaking out of the conformity that the pressures of the Great Depression and the Second World War placed on Americans, of valuing the rights of the individual over the security of the nation, of the personal over the (re)public, and so inititated the frontline of the biggest battle of the culture wars that continue to rage to this day.  Anyone interested in getting an easily assimilable introduction to the major players in this important cultural movement need look no further.  The authors neglected to provide any sort of bibliography to help readers move on to the literature itself, so we'll help out by hooking you up with The Beat Page, the best spot on the web from which to start  delving into this movement.