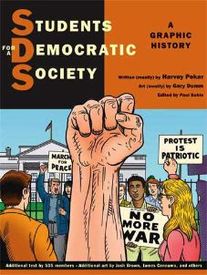 J. Edgar Hoover: A Graphic Biography
by Rick Geary
Students for a Democratic Society: A Graphic History
by Harvey Pekar and Gary Dumm; edited by Paul Buhle
w/ addditional text by SDS members and addtl. art by Josh Brown, James Cennamo, and others
As these two books are both published by the fine folks at Hill and Wang, and both arrived simultaneously at Copacetic, nestled together in the same box, it was impossible to resist pairing them here -- as they very much represent two sides (namely, the left and the right) of a story:  that of post-WW II American politics; specifically of the struggle between those forces arrayed behind national security and those standing up for individual freedom.  This was a struggle in which each begat the other, as each was what inspired fear and loathing in the other, each was what the other opposed and was devoted to destroying, until, finally, they cancelled each other out and both were gone... only to be reborn in new forms, as this is, in all likelihood, an eternal struggle. <<+>> Best known for his series of comics documentaries on famous 19th century murders, Rick Geary enters the 20th century with a comics biography of the most famous lawman of them all, J. Edgar Hoover, that manages to cull the essentials and distill them into exactly 100 pages of the precisely rendered comics that are his trademark (as Copacetic customer David Grim has just serendipitously pointed out).  Informative and enjoyable, this is a straightforward story that, while minimal in detail, is, almost entirely free of speculation, and thereby skirts salacious material regarding the longtime director of the FBI.  Nevertheless, the reader will come away with a solid picture of the man and his times.  This much and more can be said of Pekar & Co.'s history of the SDS:  a history lesson, a consciousness-raising session, a political roundtable discussion, an artistic jam-sesion --   in its mulitplicity of perspectives, this comics history provides a well-rounded portrait of its subject.  One of the most high-profile, widely-active and important political groups of its time, SDS is almost synonomous with leftist politics in the 1960s.  The tale told here is complex, multi-faceted, labyrinthine and fascinating.  The fact that Pekar's editor on this volume, Paul Buhle, is a well regarded leftist writer and scholar who was the founding editor of the SDS journal, Radical America, is a big plus in bringing together the former SDSers who tell their personal stories alongside Pekar's history.  A walloping 26 bonus tales are presented here in all thier graphic glory, including several each by Pekar and Buhle along with those by lesser known figures such as Mark Naison, Penelope Rosemont and many others.  Taken together these multiple points of view weave a comics tapestry of the SDS years. The 212 page volume closes out with brief look at the tentative revival that SDS is currently undergoing, illustrated by none other than Pittsburgh's own Ed Piskor (see below)!
J.Edgar:  retail price - $16.95   copacetic price - $15.25
SDS:  retail price - $22.00   copacetic price - $20.00
This item belongs to the categories: History & Biography
You may also enjoy these related titles:

Not the Israel My Parents Promised Me

Huntington, West Virginia "On the Fly"

The Beats: A Graphic History