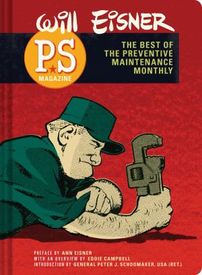 It is rare indeed when our opinion completely agrees with that of publisher provided cover hype, but in this case it does.  The material that Will Eisner produced over a period of 20 years (!!!) for P*S Magazine is indeed, "the missing link between The Spirit and A Contract with God" as the cover states.  The work contained in this 272 page hardcover volume has the highest critical-importance to critical-awareness ratio of any work we can think of.  It represents the single largest unified body of work of one of the most admired creators in the history of comics, yet very few have read much – if any – of it.  Now, thanks to Denis Kitchen, Ann Eisner, Eddie Campbell and Abrams ComicArts, we all have the opportunity to rectify this out-of-kilter relationship between material and critical appreciation.  Eisner spent twenty years focusing on creating clear concise communicative comics for the United States military.  Surely this is a factor that contributed to his development as an artist and the evolution of his mature style.  Both forcing him to hone his cartooning skills to meet the demands of the assignment and in holding back his own personal artistic goals for so long that they burst forth so spectacularly in his later years.

That said, there is no getting away from the fact that contemporary audiences are likely to perceive much of the material contained in this book to be of a highly sexist nature, complete with leering innuendo, usually with the curvacious Connie Rodd as its target.  A more careful reading will note, however, that in addition to the obvious sexualization of this character, Connie Rodd is also the source of much instruction and discipline, and so could also be seen as doing double duty as a mother figure.  It is important to keep in mind that the military of the forties (when Eisner first started doing comics work for the military, during his WW II stint in the army), fifties and sixties was overwhelmingly male, and generally unenlightened as to the constitution of female subjectivity, certainly by today's post-feminist standards.  The attitude reflected in the comics work here could, for the times, be considered, relatively speaking, as "good clean fun", yet, at the same time, undoubtedly, contributed to unhealthy attitudes.  Thus, the work here has the added anthropological and sociological dimensions of providing a window onto masculine perspectives and military attitudes of the times.

This is a painstakingly produced book, completely made up of high resolution full color scans of the rare, original issues -- many taken from Eisner's own collection!  The pieces that appear here were selected by the comics creator / graphic novelist, Eddie Campbell – who also penned a ten page overview of P*S Magazine – in consultation with Ann Eisner, who has provided the preface.  All have been reproduced at 100% of their original size to preserve the look and feel of the originals.

So, with the above caveat in mind, this book is highly recommended for students and practitioners of the comics form.  And, now it's on SALE – and at an unbeatable price!

The Will Eisner Shop