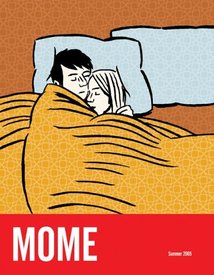 retail price - $14.95
copacetic price $14.95
MOME #1
Gary Groth, Eric Reynolds
published by Fantagraphics
This is an excellent semi-regular anthology that is stepping up to meet the demand for new work by the talented  generation of cartoonists that have been filling the pages of annual anthologies like Non, Kramers Ergot, Top Shelf, Rosetta, SPX and others.  A novel feature of this anthology title is its declared intent to feature the same collective of artists every issue, allowing the artists and audience to grow together and build an ongoing identity that is highly unusual for the world of contemporary comics. Only time will tell how this intention plays out when confronted by the realities of a publication schedule, but we can attest with confidence that it's off to a solid start.

First off:  it looks good!  Designed by Jordan Crane, MOME 1 is a chunky, squarebound 136-page edition that's formatted a tad larger than the Raw Volume 2 editions which it resembles enough to be considered a successor of sorts.  It also feels, on the other hand, a bit like a comics equivalent to Granta, the British literary magazine that has flourished for over two decades.  It's printed on a high grade flat white paper, the stories are printed in a variety of color palettes and B & W as called for.  The nature of the material presented in this anthology ranges far and wide, yet the quality and intelligence of the work remains uniformly high throughout.  Kudos to Mssrs. Groth and Reynolds on their editorial discernment.

Here's a closer look at the first issue:

I Feel Nothing by Gabrielle Bell -- A strong opener by a talent who has been doing a lot of growing lately, both in regards to the quality of her artwork and that of the storytelling which it serves.  It's a simple slice of life tale that contains a story within a story, and a nice deconstruction of a decision via the mechanics of the imagination that effectively demonstrates both the efficiency and the power of comics as a medium of communicating the contents of the human mind. B & W

Passing Before LIfe's Very Eyes by Kurt Wolfgang  -- A visual meditation on clichés.  Primarily on the cliché of "life passing before one's eye's" at the moment of death, and then, subordinately, on the clichés that make up this life.  Cleverly employing the trope of smoking, the story manages to escape being a cliché itself, and that's something of an accomplishment all on its own.  Duo-Tone.

Part Time by Jeffrey Brown -- Well, to be honest, this one's a bit of a let down:  yet another strip about being unable to come up with something in time to meet the deadline.  Yes, it's self-reflexive, yes, there're a few clever twists on the theme, and yes, it has a few laughs, but the main thing to recommend it is that it's by Jeffrey Brown, who is seemingly blessed with the uncanny ability to produce unfailingly enjoyable comics about his personal foibles.  B & W.

Life with Mr. Dangerous, Part One by Paul Hornschemeier -- This piece is, in effect, an extreme close-up on the psyche of its sole protagonist, a twenty-something woman living alone, who is, it appears, not entirely in touch with her own emotional core.  In it, Hornschemeier successfully carries out the difficult trick of letting us know more about her character than she seems to know herself.  This is accomplished through his well-conceived orchestration of dialogue which consists entirely of one-sided conversations and narration which consists entirely of introspection, with the counterpoint of a delicate delineation of subtle variations in her facial expressions and body language.  With "Mr. Dangerous," Hornschemeier continues to build a body of work that demonstrates that he, perhaps more than any of his contemporaries, has fully digested the advances in rendering psychological nuances in comics pioneered by the work of Clowes and Ware.  Full color.

The Beast by Anders Nilsen -- With "The Beast" --  the most difficult and challenging work in this anthology --  Anders Nilsen clearly stakes his claim to be in the avant-garde of contemporary comics.  An intriguing montage of a borderless 4-panel comics grid overlaid on a sequence of double-page spreads of landscape photography, this multivalent metaphysical investigation demands multiple readings -- each of which may supply the reader with a different interpretation:  first to come to light is the obvious yet superficial political commentary; next, perhaps, an examination of  delusional consciousness; digging deeper, a personal eschatology; cultural historians with a background in comics may find this story to be a descendant of the worlds-within-worlds/no-one-sees-it-but-me genre that were the staple of the pre-superhero (1959-61) Marvels authored by Steve Ditko, Jack Kirby and Stan Lee, which grew out of the anxiety and paranoia of that most intense period of the cold war which led up to the end game of the Cuban missile crisis, and so, perhaps, reveals the burgeoning of a related if more complex strain of paranoia and anxiety growing out of contemporary global conflicts.    The main thing, finally, is that Nilsen is struggling to construct a radically open form of comics that fully engages -- if not outright requires --  the interpretive powers of the reader to complete.  Full color.

Dance with the Ventures by Jonathan Bennet -- This thoroughly enjoyable story -- expertly placed to provide a moment of soothing relaxation after the arduous struggle with Nilsen's "Beast" -- convincingly recounts the details of a morning's urban idyll, seamlessly meshing visualizations of the interior psychological components of the tale with the external Pekar-esque drama.  B & W.

Eddy Bear "Takes His Share," "Tanya" & The Mom in "God Bless America" by Sophie Crumb -- This triptych of tales --  interspersed through the final third of this volume -- takes on the classic urban themes of alienation vs. conformity, material comfort vs. independence, immigration and integration.  B & W.

221 Sycamore Ave., Part 1 by John Pham -- It is appropriate, perhaps even inevitable, that John Pham, one of the reigning masters of the graphic architecture of the comics page, should produce a story whose thematic elements incorporate architectural concerns.  In 221 Sycamore Ave., Pham -- at least from the evidence provided by the first part printed in this issue -- effectively communicates the feel of the lives lived at this address.  Tri-tone color.

Overpeck by David Heatly -- Building on his large body of work dealing with his dreams, "Overpeck" takes the game one step further by creating a dream locale -- Overpeck -- where a continuing cast of characters will carry out "lives" in a world of dreams in which cause and effect, narrative and characterizations will all be subject to the language and laws of dreams rather than that  of "reality."  A great idea that's off to a good -- if disturbing -- start.  Full color.

The Jewels of the Sea by Andrice Arp -- As stated in its sub-title, this is "a story from ancient Japan" (well, as a note at the conclusion makes clear, it is actually two stories from ancient Japan, the second subordinated and integrated into the first).  It is a classic tale of love and power, clever trickery, and mythological creatures.  A fitting conclusion for collection.  B & W with pantone grey.