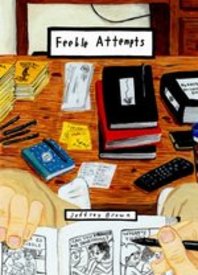 A 52-page compendium collecting those of Mr. Brown's short works that have previously appeared in out of the way places off the beaten path, such as The Chicago Reader, Blood Orange, Ain't No Dancer and Sturgeon White Moss, as well as pricey high rent digs such as McSweeney's and Project: Superior, Feeble Attempts saves the long suffering J. Brown reader from having to break her or his bank  purchasing all these pieces for the few pages of his work offered there (not to mention all the time and effort expended tracking them down).  Chuckles, drama, personal revelations, super heroics and Jesus are all here, all for less than a five-spot!