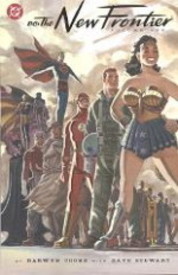 What was the best superhero comic book series of 2004 is now set to be the best superhero trade back collection of 2005.  It's hard to sing this work's praises without lapsing into a sort of rabid, gushing fanboyese, but we'll try.  With The New Frontier, Darwyn Cooke -- with the very able assistance of Dave Stewart -- has flawlessly executed his vision of a classic American masculinity and completely delivered the goods.  The series is, technically, a piece of historical fiction, as is takes place primarily during the decade long gap between the Golden Age and Silver Age of superhero comics -- roughly 1946 to 1956 -- before bringing us to the edge of the "new frontier" as defined by President Kennedy.  This period is known, in comic book collector circles at least, as the Atomic Age.  Cooke works to imagine the "real" lives of the superheroes during this historical era where superheroes were – with the notable exception of the holy trinity of Superman, Wonder Woman and Batman – absent from the American scene.  In so doing, the story captures that transition from the values of the WWII generation to that of the generation that follows:  Not the "Greatest Generation" but not yet the "Baby Boomers" either, this was the generation that fell in the gap, but nevertheless managed to change the direction of our culture.  The New Frontier presents us with the Super Hero -- specifically, the DC superhero -- version of this generation and this period.  But it is more:  Like its excellent (and now criminally out of print) predecessor, The Fantastic Four: Unstable Molecules by James Sturm, Guy Davis, R. Sikoryak and Craig Thompson, The New Frontier is a work of metacomics.  At precisely the same time that it is a swashbuckling adventure yarn, it provides a psychological deconstruction of the adventure narrative.  At the same time that it presents us with vision of a time when men were men and women were women, it asks us to ask what this means.  At the same time that it is a flat out masterpiece of graphic narrative it is an homage to the heroic comics creators of the Atomic Age:  Jack Kirby and Alex Toth first and foremost among them, but also, close behind, Wally Wood, Johnny Craig, Bob Powell, Joe Kubert and many more.  When you read this book you really can have your cake and eat it too.  And the colors, oh, the colors:  the color is alchemically integrated into the very fabric of the meaning of this work.  How messrs. Cooke and Stewart managed to collaborate at such a deep level on what has to be one of the most intuitive of tasks -- that of breathing the life of color into the strength of pen and ink lines -- will probably remain forever a mystery; but what a glorious mystery it is.  Simply put, DC: The New Frontier is a prime example of something that is unbelievably good -- you just can't bring yourself to believe that anything could be as good as they say until you finally experience it yourself.  That said, the caveat must be made that readers lacking a grounding in the conventions of superhero comics might have difficulty plugging in.  But, hey, we say that even then it's worth the try, if you're willing.DC • 192 pages • full color

This item belongs to the categories: Graphic Novel, Copacetic Select
This item is part of the series: DC: The New Frontier
You may also enjoy these related titles: