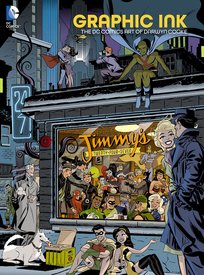 Darwyn Cooke.  Where to begin.  Cooke is the heroic fantasy comics art synthesizer of his generation, par excellence.  He knows comics. He knows how they work.  He can take them apart and put them back together again, and, more importantly, he has amply demonstrated, perhaps nowhere better than through the work collected in this volume, that he can disassemble the machinery of the styles of the greats of comics past, pick out the best, strongest parts, the ones that still hold up, and then put them all together to build an awesome new comics story-telling machine, one that can deliver page after page of action-packed adventure.  And there’s more.  His work successfully conveys, and, when the moment is ripe, reveals the emotional needs that undergird heroic fantasy; the bruised egos, the tethered ids, the lack of grace.  Cooke is practically alone among his peers working at the “big two” in his conscious understanding of the wounded life led by the reader of heroic fantasy; plus, he's a die-hard romantic.  It’s not often that we’ll endorse a product released by a division of the Time-Warner Company, but, in this case, we’ll make an exception.  It doesn't hurt that they did a really nice job with this hefty, plus-size, hardcover edition, pulling together the 400+ pages of Cooke's far-ranging work for DC that had yet to be collected in book form, including many of his standout covers, and maintaining uniformly excellent reproduction throughout.

This item belongs to the categories: Collections, Gift Catalogue, Copacetic Select
You may also enjoy these related titles: