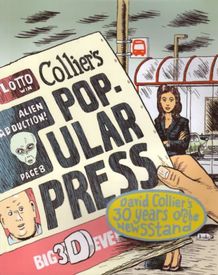 A long time coming, Collier's Popular Press is a hefty softcover volume just released by Conundrum Press.  It starts off with an introduction by noted Canadian comics scholar, Jeet Heer, who situates Collier's work here squarely in the tradition of "observational cartooning," for which he provides a concise history before ushering in a whoppin' 200 pages of Collier comics, originally published over three decades in a variety of Canadian newspapers and magazines – few, if any, of which have previously reached the straining eyeballs of stateside comics readers.  In addition, a series of Collier's essays and personal recollections are mixed in.  All but one of these (the concluding essay from Comic Art Magazine #7) originally appeared in the Vancouver-based Geist magazine and are, in typical Collier fashion, self-reflective, free-association riffs on the creation of his "banner" landscape drawings for The Globe and Mail (which are also included in this volume) and not only provide both context and depth to the comics they are interspersed with, but demonstrate that Collier is fully able to translate his sensibility into prose; "The World's Best Chinese Food Delivery Driver" perfectly captures how person, time and place are situated in memory in a tangle of association, combines image and text in a perfectly complementary fashion, and is a true Collier classic!  This hefty tome is a gem-packed treassure chest that is guaranteed to be welcomed with open arms into the collections of all Collier fans. More than that, is the fact that anyone who enjoys comics packed with personal observations of the realities of day-to-day living, of going places and meeting people, of the ins and outs of relationships, of going for a walk or going to the store, of piecing together the odds and ends of urban (and rural) living that combine to make an environment, of life on the road and life in the home – and especially those who would like to immerse themselves in a full, rich Canadian vibe – will dig this massive tome, rendered in a matter-of-fact manner that it is easy to imagine a less self-obsessed (more self-effacing?) R. Crumb doing.  This is a great book that is sure to be enjoyed by anyone who appreciates the works of creators like Frank King, R. Crumb (especially his non-fiction work of the 1980s), Harvey Pekar, Joe Sacco, Seth and Dan Zettwoch, just for starters.  There is simply no contemporary comics creator who is more down to earth than David Collier, and there is no better antidote to the feeling of being overwhelmed by the frentic pace of the non-stop electronic pseudo-connectivity of contemporary North American life than Collier's Popular Press.

This item belongs to the categories: Gift Catalogue, Copacetic Select, History & Biography, Collections
You may also enjoy these related titles:

Mini kuš! #95 – Before the Pandemic There Was a Touch Football Tourney