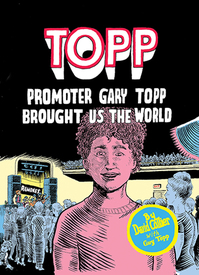 An all-new, book-length work of historical/biographical reportage on the incipient days of the Toronto punk rock scene, and  one of the key promoters who stood at the center of the whirlwind, Gary Topp, by a key founder of comics journalism, who has long focused on biographical reporting, David Collier!  This book has a bit of an American Splendor vibe about it, with it's weaving of his own personal experiences throughout and with the work's focus on a (relatively) small-scale cultural scene and the individuals who took part.  This volume is filled with stories and anecdotes of the sort that are usually ignored, missed and then forgotten by traditional historical journalism.  Aging punk rockers, take note!

BONUS:  The book concludes with the issue length story from Colliers #1 that focuses on the PiL concert from this era, originally drawn way back in 1991, providing a real "flash-back"of sorts.  While the concert depicted and described, along – crucially – with Dave's experiences thereof, took place in 1982, this piece is roughly thirty years closer to the experience than the rest of the book, and thus provides a look at not only how his art and storytelling evolved over that period, but also thusly a chance to see– through the comics lens – how the passage of time affects the perspective of memories; details and adjacent thoughts that took central stage at one point may move to the side at another, and vice versa.

Mini kuš! #95 – Before the Pandemic There Was a Touch Football Tourney