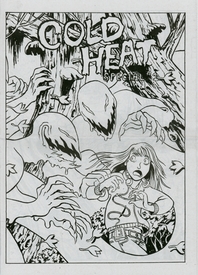 Upon learning that the Cold Heat comic book series was going to be transformed into a stand-alone graphic novel to be released in late 2008 (at the earliest [I'll say – ten years later, and still counting... - ed.]) and as a result faced with the potential for a year long drought for Cold Heat fans after their being acculturated to a regular release schedule, CH creator Frank Santoro commisioned several ancilliary Cold Heat books to tide readers over while he toils away on the core text.  The first  Special is an 11" x 14" newspaper, with artists Santoro and Vermilyea taking full  advantage of the grand page sizes to present an action-packed adventure that doubles as a sweeping simile.

This item belongs to the categories: Small Press Comics
This item is part of the series: Cold Heat
You may also enjoy these related titles: