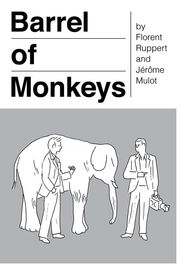 The creative collaboration between Ruppert and Mulot – who written and drawn by both artists in a "shared visual style" – began when they met at the National School of Arts in Dijon, France.  Their work has been published in France for close to a decade.  Astute Copacetic customers may recall seeing their 2008 work, Le Tricheur (The Cheat), in the Finnish edition published by Huuda Huuda, in the import area of our small press table.  Originally published in France in 2006,Barrel of Monkeys is their first work to be published in an English-language edition, and is the first release of Rebus Books, the newly launched publisher headed by noted comics scholar, Bill Kartalopoulos.  It is, like all of Ruppert and Mulot's works that we have been exposed to, a graphically inventive presentation of people behaving badly.  It's been getting plenty of good press, much of which you can access via the Rebus Books Tumblr page.

Portrait of a Drunk