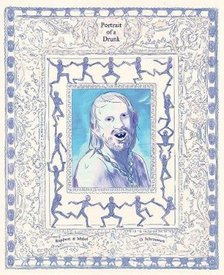 The Franco-Belgian alliance never looked so good (or been so bad) as in this lush new graphic novel by the Belgian cartoonist, Olivier Schrauwen working in tandem with the notorious French duo, Ruppert & Mulot.  The mingling of their respective art styles and characterizations is seamless and represents quite a feat of collaboration.  And now that it has  been translated from the original French by Jenna Allen, and published by Fantagraphics Books,  the Anglophone world can see (well, read) what they've been missing.  This 184 page, full color, full size hardcover delivers exactly what the title promises – and then some.  For it might be more accurate to describe Portrait of a Drunk as a “Portrait of an Age” –  that of c. 17th century Europe.  This portrait is one with a special focus on the life of the seas and sailors, raconteurs, adventurers – and pirates.  It is a portrait that we are guided through – and so is primarily from the perspective of –  the said Drunk.  And what a drunk he is!  Guy is the apotheosis of the drunkard and can lay claim to being one of, if not the single greatest drunk in the history of comics. Guy! Guy! Guy!  Guy is a man for whom the key to happiness is simple:  to be drunk at all times.  And he follows his bliss and pursues it with an enviable single-mindedness.  For Guy, there is nothing else.  He allows no distractions, and lets nothing stand between him and his goal of another drink, whether it be consumed via tankard or bottle or flagon, drink it is , drink it will be and drink it must be.  However, as you might suspect, a person such as Guy is an agent of chaos, and entropy inevitably follows in his wake. And then there’s Guy's tween sidekick of the seas, Clement who is the crucial supporting character of this tale, and in his relationship with Guy highlights the work's psychological dimension, through mirroring and developmental analogies.  Batman and Robin redux in ancestral form.

While the loathsomeness of much of Guy’s behavior may, for some, make this work impossible to get through, let alone enjoy, the spirit in which it was created is clearly one that is critically aware.  Portrait of a Drunk pulls off that rare combination of being simultaneously wildly entertaining and genuinely disturbing.  A big part of this achievement lies in the artwork itself, which is as beautiful as the scenes it depicts are horrible. The 17th century worldview it embodies still has – distinctly European – echoes in our own era.  Yet while the relentless pursuit of self interest is with us yet, along with its unfortunate partnership of cynicism and naiveté, the sense of being – along with the ability to be – fully immersed in the moment, come what may, is shown here to be built on – or at least concomitant with – a fatalism guided by a sense of mortality that has not survived into our own times.  It is this aspect, perhaps most of all, which renders it a portrait of an age, and yet, of course, it is also a child of our times...
This item belongs to the categories: Graphic Novel, International
You may also enjoy these related titles: