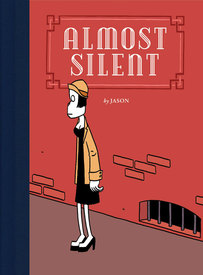 Here is a perfect embodiment of the well worn phrase, "All things come to he (or she, of course) who waits."  This chunky 302 page hardcover omnibus collects four – count 'em! – previously issued and  out of print Jason softcovers, and sells for just a hair over half the combined price of the softcovers!  So, those who didn't manage to get these the first time around, are hereby rewarded for their procrastination (or, in the case of those who are arriving late to the party, it's a variation on "the last will be first.")  The four volumes collected are:  Tell Me Something, You Can't Get There From Here, The Living and the Dead, and – the Copacetic Favorite – Meow, Baby!  All are in glorious black & white, with the exception of You Can't Get There, which has an added color (an olive-tinged goldenrod).  We are especially happy that Almost Silent enables us to be able to once again offer Meow, Baby!  This is the work in which Jason really struts his stuff by plugging his patented comics language into a veritable panopticon of forms, from the classic three-panel gag-strip, through an assortment of one-pagers, two-pagers and four-pagers, all the way through to a TinTin-esque novella.  Meow, Baby! offers the perfect opportunity to really study Jason's working method, and have a great time doing it, as this is some of his best (and funniest!) work.  Tell Me Something is a "silent-film" treatment of Jason's  favorite theme, sex and death, this time around seasoned with crime and marriage.  You Can't Get There From Here is Jason's morbidly funny twist on the Frankenstein/Bride of Frankenstein relationship.  And, finally, The Living and the Dead is, yes, you guessed it, Jason's zombie book.  And there you have it.  Wotta Deal!

This item belongs to the categories: Graphic Novel, Collections, International
You may also enjoy these related titles: