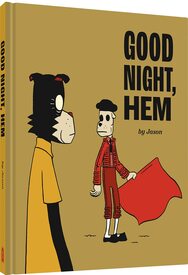 The latest from Jason is a quasi-historical drama set in Paris before and during the Second World War, featuring (a Jasonized™) Ernest Hemingway hanging out with several other historical figures during historical times, but then also mixes up historical fact with imaginary Hemingway & Co. escapades and exploits and, oh yeah, Athos of the Three Musketeers also finds his way into the mix and plays a significant role.  An intuitive comics master, Jason always delivers a satisfying read, and Good Night, Hem is certainly no exception.  Each four-panel page is as deftly composed as a Peanuts daily and and shares a deadpan delivery that has much in common with Schulz's, as well.  Jason's fluency with characterization is fully integrated with his rich stock of characters and both are expertly applied here.   Jason!