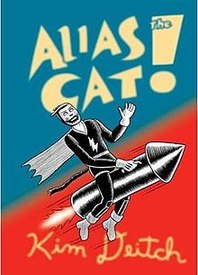 Thgis is a softcover import edition from Jonathan Cape, which is identiacal in all respects to the hardcover edition from Random House's Pantheon imprint.  Alias the Cat is probably Deitch's densest, most multi-layered work.  Putting himself and his wife at the center of the story creates a layer of ambiguity in this work, a work that can be seen as an exegesis of cartoon consciousness in comics form of a world where the boundary lines separating the imaginary and the real are becoming increasingly porous.  If you don't already have this work in its original comic book form, Stuff of Dreams, the three-issue series published over the past five or so years by Fantagraphics, then we pronounce this collection a must for Deitch fans and a highly worthwhile work for students of the mechanics of American mythologies as well as anyone looking for a fantastic fable in comics form.

This item belongs to the categories: Graphic Novel, Special Sale
You may also enjoy these related titles:

The Amazing, Enlightening and Absolutely True Adventures of Katherine Whaley

The Search for Smilin' Ed