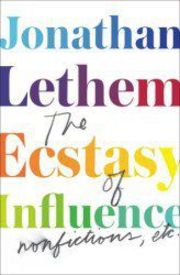 Twenty years on, Lethem is unique among contemporary novelists in continuing to bring the full force of both his critical acumen and his phosphorescent prose stylings to bear on a wide breadth of subjects that other writers often ignore – despite his having achieved the Empyrean heights of world class critical renown signified by a MacArthur prize.  Lethem remains ever true to his roots, and is the champion of the importance and lasting value of an intelligent American popular culture rooted in arts and literatures of all stripes, including comics and science fiction (foremost among which might be his devotion to Philip K. Dick; see immediately above), movies and music, novels and paintings, and more.  The Ecstasy of Influence is the collection of these writings that we've all been waiting for.  Seventy-nine engaging pieces of sterling prose – consisting of a mix of long form essays and short form reviews, as well as pieces that fall somewhere between – celebrating culture and the individual's identity-forming interactions with it that will leave every one of its readers wiser and more self-aware.

You Don't Love Me Yet (UK softcover)

The Exegesis of Philip K. Dick

Read Hard
The Fortress of Solitude