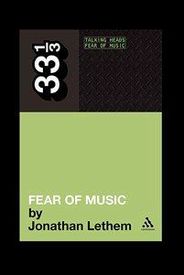 Jonathan Lethem, he's our man / When cool stuff needs explained, he's the one that can!  If there's anyone out there who can be said to have the back of copacetic culture, it's JL.  While he is best known as an award-winning novelist (Motherless Brooklyn, Fortress of Solitude, etc.) he is also an intelligent and eloquent essayist and critic – especially in defense of works on the margins that other critics of his stature seem to have an inability to appreciate.  His critiques clearly embody the author's personality and are often in themselves playfully creative, making them engagingly enjoyable in a way that is a rarity among works of cultural criticism.  This is certainly the case with these two in-depth, pocket-size looks at two works that can, in hindsight, be seen as effectively (and affectingly) bookending the Reagan years:  1979's Fear of Music, an LP by The Talking Heads and 1988's They Live, a film by John Carpenter (see next review).  Are you ready?

You Don't Love Me Yet (UK softcover)

The Ecstasy of Influence

The Exegesis of Philip K. Dick

Read Hard
The Fortress of Solitude