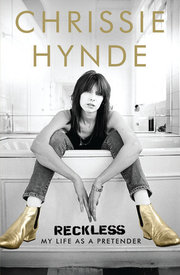 Chrissie Hynde has gone to pains even within the text of this book to let everyone know she's not a writer.  This book is fairly rough and tumble in the prose department, but, at least here, she isn't making any pretense to be otherwise.  The name of her band is, however, clearly revealed to have been intended as autobiographical, and this can be seen both in new and old light in the pages penned here.  Chrissie Hynde goes the standard memoir route in relating many significant episodes of her life (and, doubtless, as is the norm, leaving many out as well).  While often frustratingly vague as to what actually went down on many an occasion, the memoir rings true in the sense that, as anyone who lived a large portion of their life in chemically altered states of one sort or another knows, it's often difficult to remember exactly what happened, or when, or, especially, what the actual sequence of the events recalled was; or, as is also often the case, the person doing the remembering would simply rather not delve too deeply into certain memories, or maybe not go there at all.  Rather than fill in the blanks with fabrications, she just leaves the manuscript littered with lacunae.  That's rock 'n' roll.

NOW AT A SPECIAL PRICE

This item belongs to the categories: History & Biography
Search Copacetic
Just in:
See all recent arrivals...
Copacetica
Edifiying essays about all things Copacetic