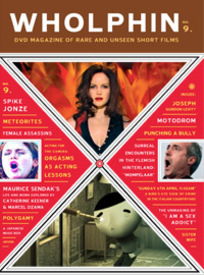 It seems like some of you have forgotten about the wholesome goodness that is Wholphin, The DVD magazine of rare and unseen short films.  Seeing as how we like all things related to the number nine,  we've chosen this issue to offer a special "let's-get-reacquainted" price on.  It's a packed disc – over three hours worth of material.  It's an especially good issue, filled with all sorts of films from around the world.  The official hype states:   "Wholphin No. 9 features three, hilarious, never-before-seen short films by Spike Jonze; Joseph Gordon-Levitt’s adaptation of Elmore Leonard’s short story, "Sparks," starring Carla Gugino and Eric Stoltz; the Academy Award-nominated documentary, "La Corona," about a high-stakes beauty pageant in a Colombian women’s prison; an incredibly rare and candid glimpse into the life of a Mormon fundamentalist who shares a husband with her younger biological sister; the Jury Prize-winning short from Cannes; Caveh Zahedi; meteorites; motordromes; acting lesson orgasms; films from Belgium, France, Germany, Australia and Japan, and much more."  Preview it here.

This item belongs to the categories: Anthologies
You may also enjoy these related titles: