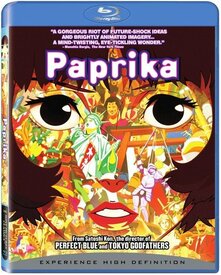 Paprika is a truly trippy, one-of-a-kind animé classic that we can guarantee you will want to watch more than once, both in order to fully appreciate what it is trying to say and simply to revel in its tour de force animation.  Paprika seamlessly splices hand-painted cel animation with CGI to create a world of the not too distant future in which dreams and technology merge – with frightening and intellectually intriguing consequences.  Taking Raymond Chandler's classic hard-boiled detective novel, The Big Sleep as his point of departure, director Kan adapts Yasutaka Tsutsui's original novel and weaves its intriguing tale of the merging of dreams and reality through the vehicle of a computer technology into a film the making of which employs technology that is not all that disimilar, and by so doing creates a fascinating and probing movie about movies and their relationship to dreams, and how computer technology is bringing the two ever closer.  An admitted influence on Christopher Nolan's film, Inception, Paprika is a thought-provoking film; as is made clear by the in-depth review below, by guest reviewer, Brendan Renne.

Paprika:  Death of the Human as Animal

The concept of technology-run-wild was a familiar concept even when it was still the 20th century; the theme is readily apparent even as far back as Metropolis in 1927.  It continued to remain a popular theme in science fiction as the 20th century progressed, with the progression of technology allowing for increasingly-informed visions of the form this runaway technology might take, and the ways in which it might threaten its human creators.

When Paprika was released in 2006, the theme of runaway technology could by this point easily be related within the distinctly non-Sci-Fi conventions of contemporary drama.  In addition, by this point directors such as David Cronenberg, with his remake of The Fly,  Ridley Scott with Blade Runner, and the Wachowski Brothers with The Matrix had made the concept of malevolent technology indivisible from questions pertaining to its effects on the human mind, body and self-identity.  These themes naturally extended to classic philosophical questions about the definition of reality, now being analyzed within a very new context.

Although Paprika may not currently show up on as many Top 100 Best Films lists as the others listed thus far (with the hopeful exception of The Matrix), it fits squarely within this tradition of films and advances their themes in interesting and unique ways worthy of analysis. Basically every other Sci-Fi technology paranoia film tends to present technology as a source of evil or, at the very least, a force of only semi-controllable chaos and corruption, Paprika ultimately makes the argument that technology is fundamentally a pure manifestation of human evolution.  As posited in this film, the evil in the world comes from men who attempt to pervert technology towards subversive ends that bring about its destruction while simultaneously knocking mankind back several hundred years in terms of technological progress.

Paprika illustrates its take on technology vs Man in an interesting way, implying a dynamic throughout much of the movie that is revealed to be the opposite of its true philosophy.  For two-thirds of the movie, the viewer is under the impression that Paprika is a story about a new technology created in order to help people that turns out to be powerful beyond the understanding of its creators.  Unfortunately, they do not realize this until a visionary miscreant steals it.  The gimmick of the invention is genius in its intriguing and simple premise.  Who can't see the benefit of a psychiatrist being able to analyze a patient's actual dreams, rather than their half-remembered interpretation of them?  In our advanced civilization, where the target audience of films such as this tend to have their basic needs more than met, the problems with one's mind can be a final harbor of life-affecting conflict, and there is no shortage of viewers who would be intrigued at the notion of analyzing their mind's contents when its defenses are down.  This film is Sci-Fi, but just barely; maybe by as little as five years.

The fact that one man's theft and re-appropriation of this technology can so quickly result in the end of human society is a hardly-disguised acknowledgment of human paranoia in regards to human creations that very well could quickly have a similar impact, with nuclear weaponry being the most obvious example.  The means by which this technology could end society-erasing the distinction between reality and imagination and creating automaton pseudo-zombies-serves as an obvious nod to technology as a corrupter of mankind, a way of making it easier for man to destroy itself.

The film does a lot to support this anti-technological perspective for much of the movie.  The inventor of the technology is portrayed as a comically-obese man-child who is more concerned with his invention than with its real-world applicability.  It is apparent that he became so nonplussed by his weight problem that he entered into a state of denial which rendered him unable to deal with his own physicality – and, by extension, with reality in general – and that this in turn led to his desire to escape into the merging of dreams and technology in the creation of the virtual world enabled by his creation of the DC mini.

Chiba/Paprika, on the other hand, is portrayed as an individual truly at odds with herself.  The professional, neurotic Chiba could not be more different from her fantastical, adolescent-like alter ego.  It leaves the viewer wondering whether she isn't every bit as troubled as those she attempts to treat.

The portrayal of these characters is a classic example of the scientists who seem as ill-equipped to be playing with the future of civilization as anyone could be, despite being bestowed with the power to do exactly that.  This of course makes reference to the fears of many in regards to world leaders who perhaps shouldn't be bestowed with any power, let alone the power to start wars.  It brings to mine such classic scenes as the conclusion of Planet of the Apes, or the setting of Twelve Monkeys, where man's ability to create objects far more powerful than their inventor results in the end of civilization simply because no one knew that it was so easy to do so.

However, the film does a dramatic about-face once the true villain of Paprika reveals itself to be a man acting as a guardian of mother nature.  He objects to the dream technology on principle, stating that dreams are the last harbor of pure humanity.  And towards this end, he intends to misuse the technology to subject humanity to an Icarus-like  fate.

The effect this plot twist has on the viewer is complex.  On one hand, by this point we have developed an affinity for the hapless protagonists that is significantly tempered by the knowledge that they are fully complicit in the crisis that envelopes everyone.  The revelation that mother nature is the antagonist effectively dashes this notion, however, and many questions are raised.  Mother nature is always depicted as a benevolent (and typically benign) force.  To have it suddenly go on the offensive in such a direct way is startling.  Furthermore, it might make one question whether the three antagonists might actually be the unwitting enemies.  If mother nature is correct, these three scientists are attempting to destroy what makes us human.

The film gives the audience precious little time to contemplate these questions, however.  Mother nature is portrayed in no uncertain terms as the enemy here.  As Chiba and Tokita attempt to do battle with mother nature, their flaws are revealed to be symptoms of their humanity refusing to let go of the past.  Chiba is repulsed by Tokita's weight for much of the film, only to finally be able to look past it and see his personality.  In addition, the fragmentation of her personality is entirely due to her inability to reconcile her real-world life with her heroic id.  When Chiba and Paprika finally combine, she is reborn out of the machine that had contained Tokita's personality, bent as it was towards evil.  As Chiba/Paprika absorbs Mother Nature and grows, the machine is now empty and harmless; a husk from which she has emerged in a more perfect and evolved state.

The perspective that Paprika relates is radical and unique.  It suggests that technology is a phase of human evolution.  It only becomes alien and unfriendly because it can appear so different from mankind, and can also pose such a tremendous threat to it as well.   The original gimmick of this film-better mental therapy through invasive technology in the form of dream recording-is revealed to be not only a positive triumph for humanity, but a stepping zone towards further improvements of mankind.  Nature, on the other hand, is portrayed as the Old Guard, a reality that humanity must transcend.

Paprika's nature as an animated film provides metaphysical reinforcement of this concept.  The whole film is entirely dependent on technological advancement in order to make an animated feature film possible.  And despite its origins, this film deals with very 'human' concepts: love, self-identity, and ultimately a rethinking of what it means to be human, and what world we actually live in.