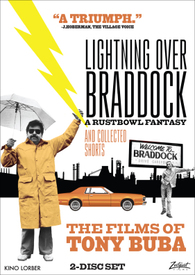 LIGHTNING OVER BRADDOCK AND COLLECTED SHORTS: THE FILMS OF TONY BUBA

AT LAST!  Here, on two full-length discs, are the collected films of Tony Buba!  For coming up on fifty years, Tony Buba has been documenting (and romanticizing) his hometown of Braddock, PA right here on the Monogahela River, just outside of Pittsburgh proper.  Anyone who hasn't seen these is in for a real treat.  And, all of those, like us here at Copacetic, who already have but have been yearning for another chance to revisit them after all these years, are likely in for an even bigger treat.  Finally!

"For five decades Tony Buba has chronicled the industrial decline of his hometown of Braddock, Pennsylvania with bleakly disarming humor and a boldly self-reflexive style. Kino Lorber and Zeitgeist Films are proud to present a two-disc collection of his newly restored films starting with his 1970s shorts and working its way through his feature-length masterpiece Lightning Over Braddock: A Rust Bowl Fantasy (1988) and on into his essential recent work. In Lightning Over Braddock, Buba plays himself as a struggling director trying to make a feature with narcissistic conman Sal (subject of the short Sweet Sal), but never manages to leave Braddock, where factories keep closing despite the heroic efforts of local unions. With its mix of politically potent documentary portraiture and hilarious comic re-enactments, it’s an uncategorizable work of art that has had a vast, if underground, influence on the future of documentary, anticipating the work of everyone from Michael Moore to The Daily Show."

And, make sure to stop in at Braddock Films for articles, film stills and more, as well as a sampling of film shorts and clips!

And, here are the films!

Making Soppressata with Dom and the Guys (2019)

This item belongs to the categories: Made in Pittsburgh, Gift Catalogue, Copacetic Select, Featured Item
Search Copacetic
Just in:
See all recent arrivals...
Copacetica
Edifiying essays about all things Copacetic