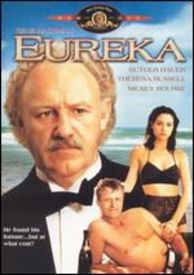 Eureka is our candidate for the single least appreciated film of all time.  This film, the crowning achievement of 1970s auteur Nicolas Roeg (Performance, The Man Who Fell to Earth), so baffled the powers that be at United Artists that they sat on it for years before finally deciding... not to release it!  With the exception of a single print, which showed briefly in NYC, LA and Toronto, it never saw the light of a North American movie projector bulb.  (It may have played Europe, however) It sat on the shelves for years more, before grudgingly being transferred to video, where it was released to zero fanfare and disappeared.  Now, at last it’s on DVD, and the story repeats itself.  The company that owns this film simply has no idea what it has.

The film is, admittedly, extremely difficult to define and describe, but, hey, we’re going to try.  And yes, it wouldn’t be overly difficult to make the case that Roeg himself got lost while making it, but, y’know, we’re not.

The script by frequent Roeg collaborator Paul Mayersberg provides a strong framework.  It tells the story of one man’s quest for absolute self determination, and in so doing reveals the ultimate impossibility of reaching that goal.   Roeg works hard to realize this story on deep emotional and psychological levels.  He is given strong support by a great cast.  Gene Hackman, certainly one of the greatest actors of his generation, turns in a fiery performance as Jack McCann, the central protagonist whose goal it is to control his destiny.  He is given excellent support by Roeg’s wife (at that time) Theresa Russell, as the daughter, and by the then unknown Rutger Hauer, as the lover, and Mickey Rourke, as the competition; roles that were among their very earliest.  A vibrantly sensual performance is given by Helena Kallianiotes as Frieda, McKann’s lover (and wife?).

Joe Pesci takes a bow as Mayakofsky, a character that is ironically named after the Russian/Soviet Poet, but actually modeled on the infamous underworld “visionary,” Mayer Lanksy, who has one of the best lines in the film, concerning the Second World War, which transpires at a point along the film’s massive chronological span: “America can’t lose the (world) war, because America is the world.” (At least, that's how we remember it, it having been awhile since we last saw this film, not having had the chance yet to view the DVD)

Ultimately, the film can be read as an allegory of America in the 20th century, and a cautionary tale for our times.  McKann’s famous (well, famous among that small coterie of Eureka fans) cry, “I never earned a nickel from another man’s sweat!” is a succinct summing up of the central delusion of any individual, group, or nation who see themselves as “self-made,” the sole authors of their achievements.  This film works hard to show a multi-faceted picture of this delusional belief, and then – in its central achievement – it goes on to show the corrosive underside of the belief and then demonstrate how this corrosion inexorably eats away at the intellectual, emotional and moral supports that hold the belief system in place from below, revealing it as the hollow delusion it is, and, finally, leading to (what we can now see as) the inevitable collapse of all that the belief supports.  How exactly the film does this is at the core of its difficulties.  It shifts from the literal to the figurative to the symbolic and then back again, all with little warning.  It jumps through and leaps across time.  Hallucinatory revels are mixed with staid courtroom drama.  Eureka bears the indelible stamp of its roots in Roeg's first film as director (well, OK, co-director), Performance -- a film in which the world of traditional criminal enterprise meets the world of psychedelic rock ‘n’ roll -- while branching out towards the inter-generational saga.  In short, this is a film that tries to do it all, and, while it's safe to say that it falls short, it gets closer than all but a very few films ever have.

Eureka is a film that merits, if not requires, multiple viewings.  It is a film that discovered a valuable nugget indeed.  Not, like those unearthed by Jack McCann, of gold, but rather, one even more valuable: a nugget of insight into the human condition.

This item belongs to the categories: Copacetic Select, Featured Item
You may also enjoy these related titles: