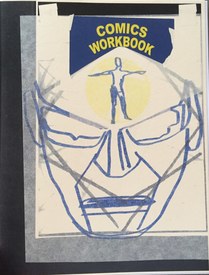 Comics Workbook switches things up with this, the second issue of Zona. Here we have a single, full-length comics piece that looks just like something that you would find in a comics workbook.  In the twenty-two, full color pages that make up this issue, Frank Santoro has prepared what is in effect a "behind-the-scenes" look at the Comics Workbook techniques (pat. pend.) that employ a limited color palette to convey mass and spatial relations, and in combination with more traditional blackline, character and action.  It is a demonstration of the visual shorthand underlying completed comics that you normally don't get to see, one that efficiently transitions visual ideas onto paper so that they can then subsequently be built up into a finished product.  This issue will be of primary interest to practicing comickers, story-board artists, and the like.  To get an idea of how to visualize narrative progressions.  Hand signed and numbered by Frank Santoro in a limited edition of 100 copies.

This item belongs to the categories: Handmade, Made in Pittsburgh, Small Press Comics
You may also enjoy these related titles: