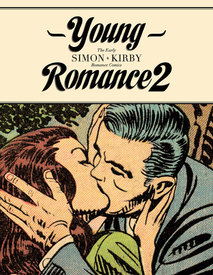 Defying the norm, this second collection of Jack Kirby and Joe Simon's classic romance comics – a genre which they created, by the way; Young Romance #1 was the very first romance comic book – is a better book than the first volume, with both stronger stories and superior reproduction than the first volume.  Romance was among the most successful of comic book genres in the history of the form, and was the most popular during its heyday of the late '40s and early '50s – the period on display in this excellent volume.  Many people have a negative perception of romance comics as cliche ridden melodramas of brainless women duped into marriage by chauvinistic, condescending men.  While there is more than a grain of truth to this in the later romance comics created after 1955 under the proscriptions of the definitively paternalistic Comics Code Authority, the early years of romance comics were full of vital tales of women in search of their own destiny.  While of course these stories employed the reductive approaches to narrative necessitated by the requirement that major life episodes be squeezed into 8 to 12 pages of comics, the stories, and especially the characters that populate them, on display in the works contained in this collection are head and shoulders above other comic books being produced at the time and set high water marks for the medium.   The advent of romance comics was an important development and romance comics remain a key component of comics history.  The romance comics contained in this collection are both foundational and among the best.

We've created a swell preview of this book HERE.  Check it out!

NOW ON SALE!
This item belongs to the categories: Classic Comics Collections, Copacetic Select, Gift Catalogue
You may also enjoy these related titles:

Challengers of the Unknown

Monsters: The Marvel Monsterbus, Volume One

The Art of the Simon and Kirby Studio

Strange Worlds of Your Dreams