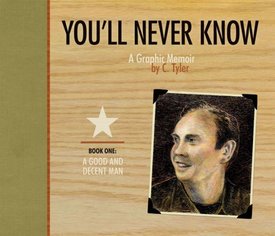 Well, you know that Fantagraphics has entered the ranks of the mainstream when they have a Fathers' Day release, and, yes, you guessed it, this is it.  It is Carol Tyler's memoir of her life with father (and mother and her own daughter, and more besides... but the central focus here is on dad).  Formally, it shares some aspects with Maus:  the adult child interviewing the elderly father to pry out the WW II memories before they're lost forever, and the concomitant presentation that intertwines these present day efforts with the actual recollections themselves.  Tyler, of course, brings her own distinct visual style to these efforts, but, more than that, she has hit upon an effective, original formal device of presenting her father's WW II recollections in the form of a comics scrapbook/photo-album that is sure to pull at the heartstrings of some readers.  There are probably not an awful lot of Copacetic customers out there who have a still living father who fought in "the Big One," so it may seem that we're wasting our breath here, but this book will be appreciated by anyone who can be engaged by a deeply personal and heartfelt exploration of family history as well as anyone who enjoys fine comics, and will provide a special pleasure to those who would like to celebrate and explore the father-daughter bond.

This item belongs to the categories: Graphic Novel, Gift Catalogue, History & Biography
You may also enjoy these related titles: