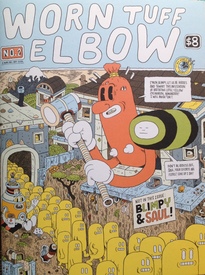 Marc Bell is back!  It’s the long awaited return of Worn Tuff Elbow! Actually, to be honest, given that the last issue (which was also the first) came out over 14 years ago, the truth of the matter is that we had given up waiting and had long ago been resigned to there being only the one issue.  So, it was all, “Lo! and Behold!” here at Copacetic when we caught sight of this second issue.  Seeing as 14 years is quite a stretch, we’re figuring that many, if not most, of the current readers of this space were heretofore entirely unaware of (what we can now correctly refer to as) this comic book series.  We trust, however that most are aware of WTE-creator, Marc Bell as it has only been a handful of years since our last fresh delivery of Mr. Bell’s idiosyncratic inkings in the form of his amazing masterpiece, Stroppy.  Worn Tuff Elbow #2 is a fine-tuned, hand-crafted grab-bag, an anarchic assemblage of pent-up pen & ink mayhem.  This plus-size comic book runs 36 pages, with a heavy cardstock cover, all crisply printed in Canada. It starts in black & white, but, unusually, gradually transitions to intermittent spot color and then through increasingly colorful pages on to full color – and then back again to black & white!  Along the way we are treated to “Coffee Shop Comics”, “Tinkle Test”, "Bologna Buffet”, “The Ten Eyed One Visits an Art Gallery”, “The Free Lunch”, "Monsieur Moustache and the Tale of the Bologna”, “Topless DaDa End of the World Comics” and more!  We will also get the chance to experience the full range of comic book accoutrements, including introductory acknowledgements, table of contents, shout-out page, and a letters page – although, in a surprise twist, the letters here are all from Marc Bell, pre-emptive responses to letters he imagines having received (Bonus fun fact: the longest off these is to Pittsburgh-Based, cartoonist extraordinaire, Frank Santoro).  It’s the return of Worn Tuff Elbow!

This item belongs to the categories: Copacetic Select, Small Press Comics
You may also enjoy these related titles: