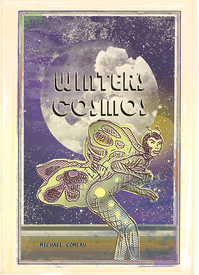 Winter's Cosmos is a 300 page experimental hybrid work of photo-collage/comics.  It integrates a dizzying series of collages composed of posed, original photographs, found photos, historical/public domain book illustrations and newspaper and magazine clippings of all sorts into a hand drawn comics narrative complete with word balloons and narration employing a wide variety of mechanical fonts along with hand lettering.  In sort, this isn't your father's comic book.

"In the tradition of 2001: A Space Odyssey and Silent Running, this genre-bending photo and comics hybrid presents the final years of a mission to seed a planet in a distant constellation and the failings of both human and artificial psyches in the face of the vastness of space."