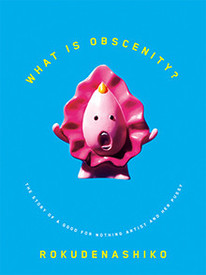 What Is Obscenity?
Rokudenashiko
published by Koyama Press

North American readers of What Is Obscenity? may find themselves asking, "What is all the fuss about?"  As each nation has its own history, each culture has its own norms and taboos and each progresses in fits and starts based on a wide variety of factors.  So, while there are aspects of Japanese norms regarding sexuality that much of North America may find "racy" and/or unacceptable, most here in the new world will be surprised to learn that Megumi Igarashi, a young woman in Japan, was subjected to persecution and arrest for making three-dimensional sculptures that humorously incorporated the shape of a vagina (manko, in Japanese).  Most were small-scale, table-top size and one was basically a modified kayak (not too difficult to imagine), yet their creation resulted in their creator being hand-cuffed and led off to jail and brought about a squall of media outrage.  Here, in the pages of What Is Obscenity?, Ms. Igarashi, going by the ironic nom de plume of Rokudenashiko -- which roughly translates from the Japanese as "useless good-for-nothing" -- relates her experience in a 178 page manga-documentary that is interspersed with a handful of photos and a few, minor bits of explicatory text.  It is by turns funny, depressing, and surprising, but most of all it is instructive of the ins and outs of human psychology, social constructions, and stubborn resistance to change.

This item belongs to the categories: International
Search Copacetic
Just in:
See all recent arrivals...
Copacetica
Edifiying essays about all things Copacetic