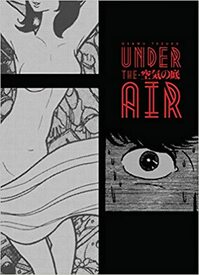 Under the Air is a 288 page compendium of classic Tezuka shorts.  Of the fourteen tales it collects, all of which were origiunally published between 1968 and 1970, ten were originally created for a monthly series of "Custom Comics" published by Play Comics.  All the stories are amped up and over the top!  Two stories involve variations of brother/sister incest (one in a science fiction context).  THree of the stories involve animal <=> wo/man transitions.  One involves a morality play on white American racism that is linked to the then still ongoing Vietnam War.  And Tezuka himelf features as a character in two of the stories!  All involve action, suspnse and intrigue.

This item belongs to the categories: Collections, International
You may also enjoy these related titles: