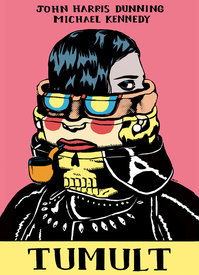 The aptly titled Tumult is a psychological thriller which works to represent the inner state of its central – male – character, who finds himself ineluctably caught up in a world of intrigue – of his own making – surrounding a mysterious woman, in this graphic novel contribution to the noir tradition of the femme fatale that more clearly than most, demonstrates the fatale aspect of the femme arises from masculine constructions and projections.  The script, by John Harris Dunning, creates a gradually unfolding, swirling, chaotic confusion triggered by the impulsive dissatisfaction of its protagonist, Adam Wheeler.  This is, in turn, coolly contained by Michael Kennedy's metronomic layouts, primarily executed in a three-tier – mostly six-panel – grid, punctuated by brief forays into four- and eight-panel grids; then, in a twist, the coolness of these grids is blown out by a vibrant color scheme that reflects/projects Wheeler’s moods, creating an unrelenting, at times discomfiting tension, that continues throughout the entirety of this fullsize hardcover's 178 pages.