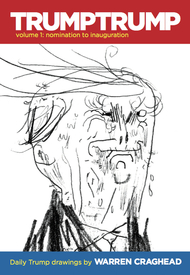 This 204 page hardcover volume collects the first six months of Craghead's daily drawings, each accompanied by a Trump quote and/or with context and commentary from that date (all of which are sourced in the notes), beginning with the day when Trump accepted the Republican nomination for president on July 21, 2016 and ending with the day of his inauguration on January 20, 2017.

"Every day, Warren Craghead draws and shares grotesque portraits of Donald Trump and his minions. TRUMPTRUMP Volume 1 collects the first six months of these daily drawings with context and commentary, from when Trump accepted the Republican nomination for president on July 21, 2016 until his inauguration on January 20, 2017.

Warren Craghead III lives in Charlottesville, Virginia, USA with his wife and two daughters.
He likes to make pictures and has exhibited his work internationally. He has also published many works including the Xeric Grant winning Speedy and several collaborations with poets and writers. He has been nominated for an Ignatz Award and a Pushcart Prize and is a three-time Virginia Museum of Fine Art Fellow.

He received an MFA in 1996 from the University of Texas at Austin, a BFA from Virginia Commonwealth University in Richmond, Virginia in 1993, and attended the Skowhegan School in 1993.

This item belongs to the categories: Small Press Comics, Web Comics Collection
This item is part of the series: Retrofit Comics
You may also enjoy these related titles: