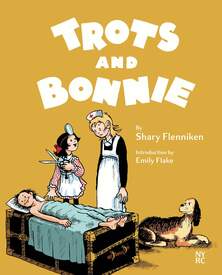 Here it is, what is sure to be the definitive Trots and Bonnie collection.  Originally appearing in the pages of National Lampoon from, roughly, the early-1970s to the late-1980s, Trots and Bonnie featured Bonnie, a preternaturally naive 13 year-old "everyteen", and her dog, Trots, along with her sidekick, the worldwise Pepsi, and her comic foil, the clueless male, Elrod.  It was – and still is – a one of a kind strip.  Its creator, Shary Flenniken, employed a strong grasp of the classic strips from back in the earliest days of the Sunday comics page – the line, the pacing, the page layouts, the characterization; all of it – and then drafted it in the service of fearsome fun frank frolicsome feminist forays against the mainstream (here read, masculine) status quo, that took no prisoners and did so in the pages of a magazine that, while also poking holes in the façade of our republic, was otherwise very much a boy’s club.  Comics taking similar aim were also to be found in the pages of underground comics like Tits and Clits and Wimmen’s Comix, but, being underground, those comics reached a largely different audience from those picking up National Lampoon at the newstand.  It is, however, in its formal attributes, that Trots and Bonnie stood – and still stands – most apart from the crowd.  In the strips that fill this collection, readers will encounter pages that incorporate formal attributes of the likes of Clare Briggs’s Real Folks at Home, Winsor McCay’s Dreams of a Rarebit Fiend, George McManus’s Bringing Up Father, Frank King’s Gasoline Alley, and other classics and did so in ways that made their ways of seeing newly relevant to her times – and ours – and by doing so connected their respective eras in important ways.

This collection was edited and designed by Norman Hathaway and includes an interview with / overview of Flenniken's life and career, along with an introduction by Emily Flake that shares with readers the kind of impact Trots and Bonnie had on its original readers.

This item belongs to the categories: Classic Comics Collections, Copacetic Select, Gift Catalogue
You may also enjoy these related titles: